Never met a female pilot? Well, here’s one who is among the five percent of female pilots globally – 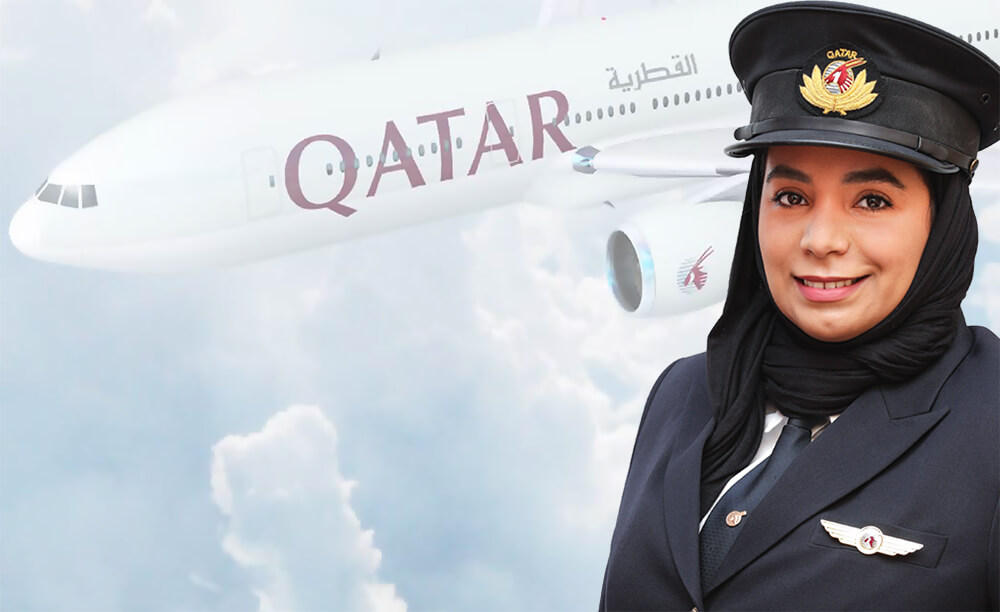 While women have been taking to the skies since the early 1900s, it still comes as a surprise to some people to see or hear of female pilots. Globally, the number of commercial female pilots has been steadily increasing, and the Middle East region is no exception, with several female pilots known for flying both commercial and fighter jet planes. Qatar’s very own Hadfah is among them.

The 27-year-old Senior Co-Pilot for Qatar Airways has always wanted to fly a plane, and in a typical ‘go after your dreams’ story, tells us of her journey, and the obstacles she overcame to realize her childhood ambition. Hers is a story of inspiration!

What does being a Qatari female pilot feel like?

I feel responsible as many Qatari girls see me as a role model. This makes me want to work harder and strive to live up to their expectations by exceling in this chosen field. I also feel proud for the admiration I receive, and I am especially proud that I contribute to the achievements of Qatar, and in a small way, am living up to the aspirations of His Highness the Emir, who said that Qatar deserves the best of its people.

What sparked your interest in becoming a pilot?

I have always dreamt of becoming a pilot, and as I grew older, this passion kept getting stronger as I started to love traveling and learning about different civilizations, customs and traditions.

What was your family’s reaction when you first broached the subject of becoming a pilot?

My mother encouraged me to enter the world of aviation. She’s a firm believer that perseverance, seriousness and dilligence are necessary ingredients for achieving whatever we aspire to be. She is my biggest supporter.

What challenges did you face at that time?

I faced several challenges due to the fact that being a pilot was an unfamiliar profession for a woman to get into in the Gulf, especially as a Qatari woman. There were also customs and traditions to contend with.

What challenges did you face being a female cadet pilot in training?

Thankfully, I faced no challenges as a girl. I studied at the hands of professors from Britain. They treated everyone equally. There was no gender differentiation. The challenge was only to adapt to the laws, to study hard, and deal with everyone professionally, as well as take the profession very seriously because we are responsible for the lives of many human beings.

What do you think of other female pilots?

They have all my respect and appreciation. It is not an easy job, as you need speed, courage, determination, and also the need to make the right decisions at the right time. I’ve had the privilege of flying as co-pilot with three female captains so far, and the experience has been great. I hope to achieve what they have achieved one day.

Do you see yourself as a role model to others?

Yes. I also see myself as a role model at home, because my younger sister has also joined the Qatar Aeronautical College, and will very soon begin training with Qatar Airways.

What do you most love about your job?

I love everything related to my profession. I have learnt a lot from many captains I have flown with, and I have visited many countries and learnt about unfamiliar customs and traditions. I also get to meet lots of people!

What’s the least favorite thing about your job?

There is nothing I don’t like about my job. It truly is a dream that came true for me. I hope to make captain one day soon.

Who is your biggest supporter?

My mother. She stood by me through thick and thin, since the day I joined Qatar Aeronautical College. She taught me not to give up on my dream. She always told me that I can do whatever I want, and that I am responsible for the decision I made when I was a child to become a pilot, and that I have to achieve it.

Who do you look up to?

Her Highness Sheikha Mozah Bint Nasser, the leader of the Education Above All campaign, is my inspiration and role model.

What’s the best piece of advice given to you?

To not stop asking questions, and to continue learning no matter what my rank or position is.

What was your first flight?

It was in May 2016, when I had my first takeoff and landing with passengers flying from Doha to Brussels. I had an indescribable feeling that filled me with enthusiasm, happiness, and a sense of accomplishment.

What’s your most memorable flight?

There have been many memorable flights, but the most important trip was one I made recently to Malaga in Spain. This was the first Qatar Airways flight to Malaga. It was a new and enjoyable experience, and I was proud to be a Qatari lady who took that first flight out to Qatar Airways’ new destination.

What questions do you get asked a lot?

Among some of the popular questions is whether we can land safely if we lost one of the plane’s engines, and how to fly a plane.

What’s the one thing you miss when you’re travelling?

I miss my family and friends the most. When I travel to beautiful places, I wish they were there with me.

If you could fly anywhere today, where would it be?

I would like to visit many countries, including the Greek island of Zakynthos and the island of Mauritius.

What advice would you give aspiring female pilots?

To not give up on their dreams of flying no matter how difficult it may seem. It’s a job that needs to be taken very seriously as it comes with great responsibility. I wish aspiring female pilots every success for a brilliant future!